Spain used to be a kind of Eldorado. It was fabulously rich in minerals. Rome and Carthage both financied their wars with Spanish gold and silver.

There were mines working all over the peninsula: copper mines, like the Riotinto in Huelva; gold mines, like Las Médulas in León; silver mines, like El Centenillo in Linares. And in the booming first century, the Romans opened lapis specularis mines near Cuenca. 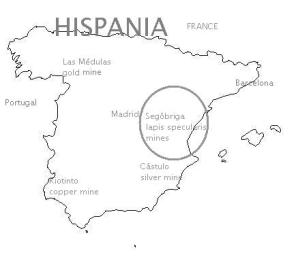 Lapis specularis is a variety of gypsum (selenitic) that forms crystal sheets and they were used as window panes.

In the old world a window was just a hole in the wall—the English means “wind eye”.   Glass had been invented long before but it was blown glass, used only for small vials and decorative beads.No one had figured out how to make glass in sheets.
One day some Roman had the idea to stick a piece of stone crystal in the window hole. That let in the light and, at the same time, kept out the weather and the draft. It was a small piece of crystal and it wasn’t very transparent, but it made a big difference in the room.

Builders soon began looking around for bigger, clearer crystals and found one called lapis specularis. It is nearly as clear as glass and it could be split into fine sheets and cut easily to size. Plus, it did not seem to weather or to change in any way in heat and cold.

Some entrepreneurs saw the potential and sent out scouts all over the Empire to find deposits. Good lapis specularis, says Pliny in his encyclopedia called Natural History, comes from mines in Asia Minor and North Africa but the best comes from an area of 100,000 passi around a little town in Spain (Hispania) called Segóbriga.  Pliny was in Spain in 74 AD and saw the mines himself.

The Emperor Nero ordered lapis specularis for a skylight in his Temple of Fortune and it was used in the same way in some public baths in Rome. The sheets are usually less than a foot square but they can be put together like the segments of stained-glass in the old cathedral windows. The Emperor Tiberius had a greenhouse made of hundreds of crystal sheets. Rich men everywhere wanted the new windows for their villas. They became a great fad. Even carriages were made with lapis specularis windows.

Other uses were found for it too. It was pretty, it sparkled. When ground up and mixed with the sand of the racetrack and the amphitheater, lapis specularis gave the shows a special circus twinkle.

A scene from the movie Ben Hur

The boom lasted for just over a hundred years.  Slaves worked mines everywhere and sent the plaster in ships to Rome.  Men got rich, mining towns like Segóbriga began to blossom with monumental buildings paid for by their new-rich families.

Ruins of the Roman town of Segóbriga, Spain

But then sheet glass was invented and plaster windows were suddenly out. Lapis specularis was no longer of any interest. The mines were abandoned and the whole business was forgotten. For centuries historians reading Pliny weren’t even sure anymore what lapis specularis was. And the location of the famous town of Segóbriga was disputed. The mines were 100,000 passi around that city; but what was the length of a Roman passus?

What the Archaeologists Found

Starting in the eighteenth century, archaeologists excavated a buried city near Cuenca and found proof that it was Segóbriga.
They agreed on the size of a Roman passus, approximately 1.478 meters. That meant that Pliny’s 100,000 passi were about 147 kilometers. If the town of Segobriga is the center, then the mines should be inside a radius of 73.9 kilometers around the city.

They started checking out strange caves near Segóbriga and saw that they were in fact the lapis specularis mines Pliny had been talking about. No one had paid much attention to them for a thousand years. Many Spanish towns have caves and labyrinths under them, of unknown origin. These were a few more. Some were considered dangerous holes and traps to stay away from, others, half-collapsed, were hidden altogether. In the 1980s archaeologists excavated a couple of the known ones. Recently experts like Juan Carlos Guisado have found a dozen more. 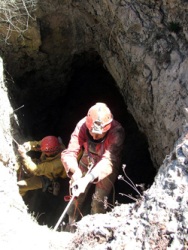 Inside the Lapis Specularis Mines

Specularis mines are underground tunnels like ant colonies. Miners picked away at the earth until they found good crystal, then hauled it up to the surface in buckets. To get at minerals such as copper, where the proportion of metal to dirt is high, it pays to open a big pit. But lapis specularis comes in little deposits or incrustations only here and there in the ground, so the best method is to tunnel through the earth until you hit the crystal, chip it out, then go on until you find more, moving no more earth than is necessary to keep your way clear.

The miners moved forward by the light of little oil lamps set in niches in the wall, and they left a pillar of earth here and there to keep the roof from falling in. Pliny says it was dangerous and miners often died from collapses.

Ancient gravestone showing miners in the siver mines of Cástulo

Lucerna or oil lamp used in the specularis mines around Segóbriga

A few years ago a visit to one meant putting on a miner’s helmet with a carbide lamp attached and crawling through a deep hole in the ground until you came to a big chamber where you could stand up. But now several of the mines have been opened and offer guided tours to visitors.
The walls are full of pick gouges—made by men two thousand years ago. The broken-off point of a pic is still rusting in a few of them.
There is ancient graffiti on the walls. Over the centuries a few people went down into the mines—a very risky thing to do. It is easy to get lost in the labyrinth, especially in the darkness after your little oil lamp goes out. So far, no Latin writing has been found. The slaves who worked in the mine were no doubt illiterate and many must not even have spoken Latin well. There is Arabic graffiti from the time of the Arab occupation, between 711 and 1100 or so. And a seventeenth-century Spanish signature looking like one of Shakespeare’s or Cervantes’, with a looping rubrica underneath.
Outside some of the mines archaeologists found a miners’ cemetery. Around it were fragments of ceramic cups with a name (Greek) scratched on the base. Cups and little eye-wash dishes were a slave’s only possessions.

See this great site on the specularis mines.