The Roman Empire was a nice package of countries and peoples. But what happened if you didn’t want to become part of it?

The native Spaniards of a little town called Numantia decided that they were damned if they would be bullied by Rome.

They were not damned, as it turned out, but they were annihilated. Rome itself admired them for generations. 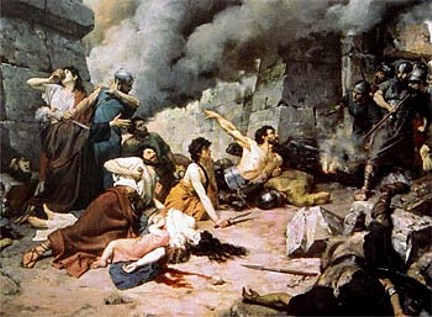 Numancia, a painting by Alejo Vera.   The Numantinos kill themselves rather than surrender to Rome. (public domain photo)

A Visit to the Old Town

Now from the top of a pretty hill the guide (also pretty) tells you to look one mile out. 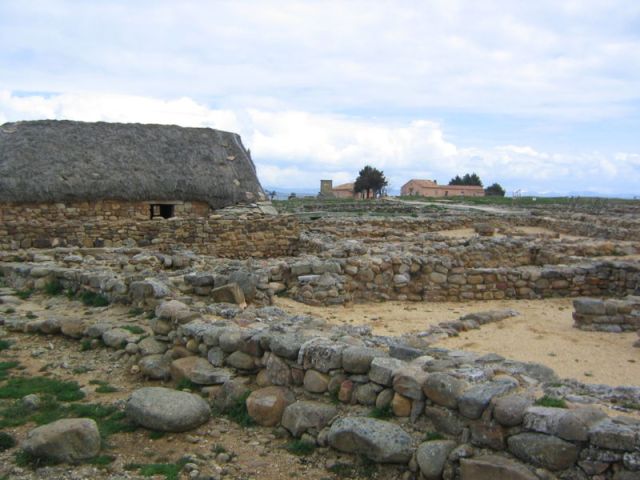 The ruins of Numantia today (public domain photo by Txo)

“See that red marker?” she says.  “That was where one of General Scipio’s camps were, with its tower.” Then she points a little to the left. “And that post marks Camp Two. If you look around you will see the other five.
“The camps were connected with a wall twelve feet high and a ditch ten feet deep. There were watchtowers every fifteen or twenty meters and something like 50,000 soldiers. Numancia was completely surrounded.”
Your imagination builds the wall up again and appreciates the neatness of it all. Then you remember where you are standing and that you are now a Numantino, and some of the old scare creeps in. You don’t stand a chance.

They must have told you that General Scipio, who commanded the army out there, didn’t horse around. He was the general who had wiped Carthage off the map. When he was done with it, the great city was just a charred, bumpy field. His plan for the subjection of your little burg was to reduce her by starvation. He wouldn’t even give you the chance to fight and die a warrior’s glorious death.

Some Brave Soldiers Broke out

There was a weak point in Scipio’s wall where it had to jump over the stream at the foot of the hill. He had tried to block the stream but a commando of brave Numantinos slipped under the wall undetected one foggy night and ran to the Celtiberian towns around to ask for help. They were able to collect a band of patriots and prepared to attack the Romans from the rear and break the siege. But some old Celtiberians who were afraid of what would happen to their people if Rome wasn’t defeated, warned the Romans. What was Scipio’s punishment for the hundred brave Celtiberian youths who had promised to take part in the action?
“Cut their hands off” was his order.

Miguel de Cervantes himself wrote a play about the heroic Numantinos. The legend was that they refused to surrender and that after first eating wood and leather, they ate their own dead. The few that were left when the Roman soldiers stormed into the town killed themselves.  Skeptical historians think they were simply made slaves—the usual fate of defeated warriors.

Of course Scipio saved the most presentable of them to take back to Rome for his triumph parade.
Needless to say, he razed the town. (See my comment below with the Polybius quote on the usual Roman treatment of conquered towns.)

What do you see today?

Numancia is just outside the city of Soria. 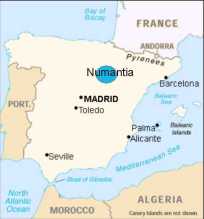 The modern province of Soria, Spain. The ruins of Numantia are just five kilometers from the city of Soria (map from file)

Archaeologists have brilliantly restored some of the old town and its walls and houses. There you can learn better than in any book or museum about those old times. 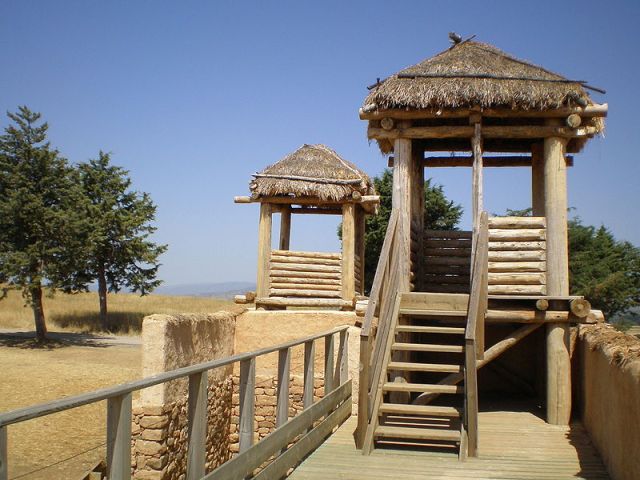 This is a postage stamp commemorating the Numantinos’ stubborn defiance of Rome. 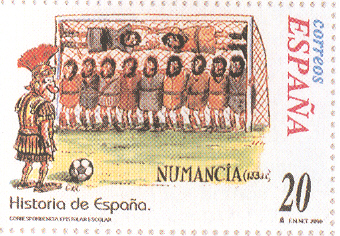