A Roman Pump in Perfect Condition

The Ctesibius pump in the Museo Arqueológico Nacional de Madrid

In one of the ancient copper mines of Spain (Sotiel) this ingenious pump was discovered.

Here are the pieces recently copied and cast at the Codina Foundry in Madrid: 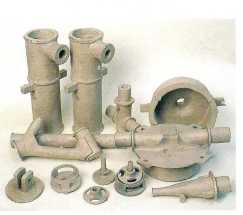 It is the famous sipho described by Pliny the Elder and Vitruvius, in perfect condition after two thousand years.

This kind of pump, which looks like some nineteenth-century contraption, was in fact invented by Ctesibius of Alexandria, a sort of Merlin who lived in 250BC.
It consists of two identical cylinders, each with a piston, that converge in a chamber with valves that open and close alternately to let water pass through without interruption. 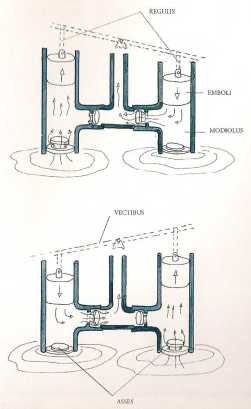 Mining engineers believe this one was not used to empty water out of the mine but rather to spray cold water on rocks that had been heated, to fragment them. Or perhaps to put out fires in the mine, as in this eighteenth-century etching showing another version of the Ctesibius pump in action.

Didn’t the old backyard pumps in America work on the same principle?

This entry was posted in 1. Bookmark the permalink.

17 Responses to A Roman Pump in Perfect Condition