The most outstanding thing in Caesar’s book on the Civil War is his clemency.
Again and again he pardoned his enemies in the hope that they would become his supporters.

The Romans themselves were impressed by this new device. They declared it a virtue and erected a temple to Caesar’s Clemency.

There were traces of it all through ancient history but it was extremely rare. The natural thing was to destroy your enemy, not pardon him. After you beat him in battle or got your hands on him, you killed him, both in vengeance and to intimidate those like him.

According to the Greek historian Polybius, who witnessed the destruction of Carthage and Numantia in Spain, the Roman army wrought terrible vengeance on a rebellious town. They always killed every living thing.

Already in Caesar’s first book on his conquest of Gaul he showed a new approach. He often pardoned an enemy after making him swear allegiance to Rome once more.

A coin with the goddess Clementia and Caesar’s spoils of war, the fruit of his policy

He had decided that clemency was a better tool than vengeance, a better means to his end.
Sometimes this worked and sometimes it didn’t.

Yet in his second book Caesar hasn’t given it up. On the contrary, the book is a history of his experiment with the device. As soon as he crossed the Rubicon he started pardoning enemy Romans and their supporters. The commander and the inhabitants of the first town he took were brought out for him to punish. Among them were Roman senators and knights who had fled to the town when they heard he was coming with his army. “Caesar protected them from the insults of his own soldiers, gave them back their possessions, and set them free,” he says.

The rest of the book is filled with examples of his clemency. He tells how in some cases he had to meet with the resistance of his soldiers, who considered what he was doing foolish.

Were they right? Clemency is certainly not the most efficient policy. Tradition (and instinct) had always prescribed the immediate elimination of your enemy. What if he promises to be good and then secretly plots to undo you? Or joins the enemy army again and you have to fight him a second time?

In fact Caesar had to re-fight many of the generals he freed after beating them the first time. Some of them he had to fight twice more.

But he was ultimately right, wasn’t he? In the long run clemency is the best policy.

In Caesar’s case there was no long run because his pardoned enemies assassinated him. 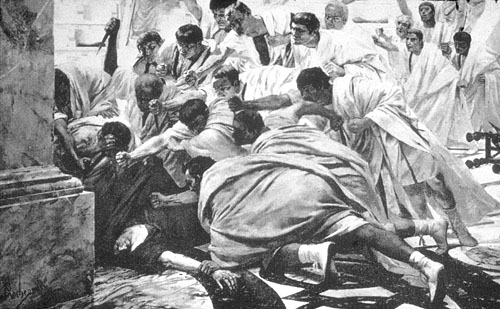 Though some showed great respect for his clemency, his successors did not practice it.  Mark Anthony and Octavian liquidated their opponents. The Roman Empire began with proscriptions.