There is no place like it in all the world.
Look at El Greco’s unforgettable painting first.

The whole city is a sort of natural castle with a moat, the Tagus River, in a deep gorge around most of it. The only way an enemy could take it was to attack the north side.  That is where the highest walls are. 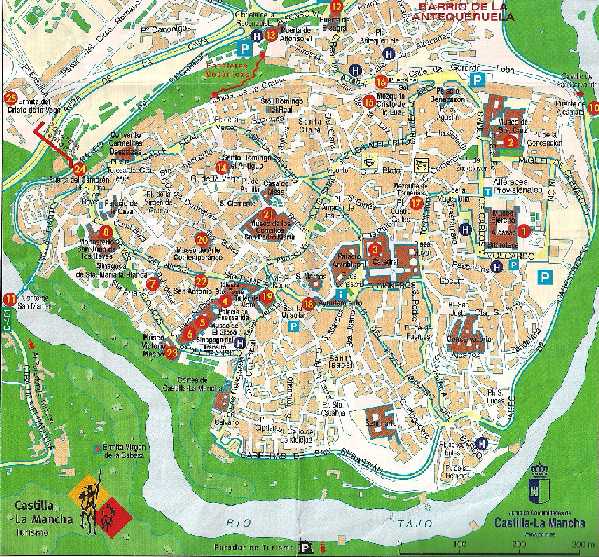 El Cid entered the city through this old gate, right under the Arab horseshoe arch, side by side with his King Alfonso after they took Toledo back  from the Moors in 1085.  The Moors had held it for nearly 400 years.

El Cid and King Alfonso received the cheers of liberated Christians as they rode up the very steep street to the castle.

Here is the castle at the top of the hill–the great palace-fortress of Toledo. All the kings, Muslim and Christian, lived here.

It needed to be rebuilt after the latest Civil War, when the Nationalist bombs nearly leveled it. Inside now is one of the most fascinating war museums you will ever see.  Ancient swords, Cortez’s flag, Charles V’s campaign tent, Napoleon’s letters to his brother King Joseph…

A hundred and fifty yards from the castle, but only as the crow flies, for the streets of Toledo are famous for the way they wind and climb, is the cathedral.  It is one of the greatest in all of Christendom.

In this vast Museum of Faith with its endlessly tall Gothic pillars you will find noble family tombs with stone heroes lying atop them, all dressed in their 14th  and 15th century armor; cardinals’ graves on the floor with their names in Latin  and their dusty red hats hanging high in the ceiling above them.   The sacristy is an art museum of works by Goya, Murillo, Rafael, Rubens, Titian,Van Dyke, Bellini, El Greco.  On the front wall is El Greco’s masterpiece, the Expolio.

Want to visit his house and see how a wealthy man lived in the sixteenth century?  On the way there stop in at the Church of Santo Tomé and see El Greco’s greatest work: The Burial of the Count of Orgaz. 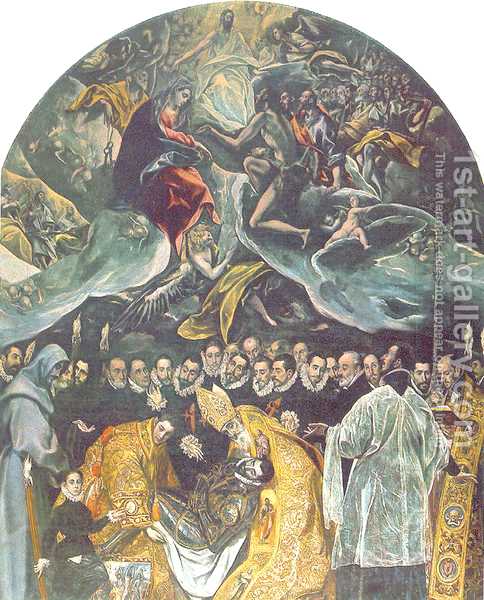 Does it remind you of Michelangelo’s Last Judgment?  El Greco had seen that in Rome before coming to Spain and even offered to chip it away for decency and paint his own on the Sistine wall.

This is El Greco’s living-room. 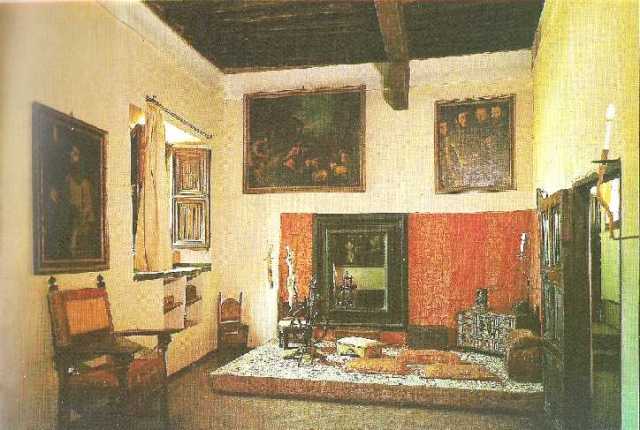 Moorish customs.  A sort of comfy indoor tent with cushions rather than chairs for the women.  Though there were little stools for the girls at the spinning wheel.

There are two impressive synagogues in Toledo. This is Santa Maria la Blanca, with the original ceiling made of Lebanon cedar like Solomon’s first temple. 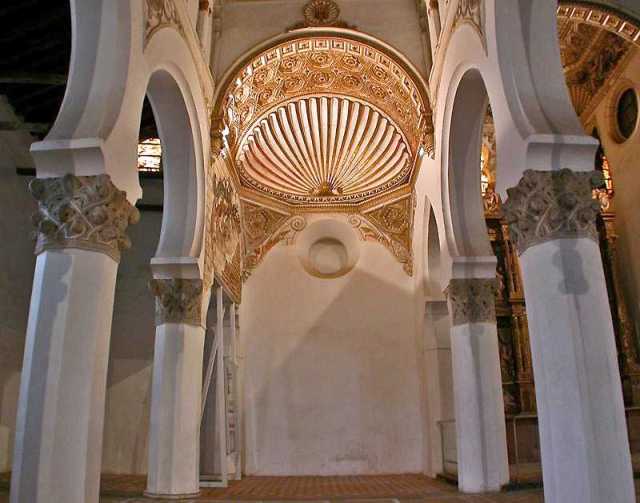 How could a Jewish synagogue have a name like that?   After the Jews were expelled from Spain in 1492 it was made into a Catholic Church.

That same year Ferdinand and Isabella drove the Moors out of Granada and completed the Reconquest of Spain. To commemorate their victory they built this sumptuous monastery in Toledo, San Juan de los Reyes.

On the walls hang the chains they took off the Christian prisoners when they liberated the city. 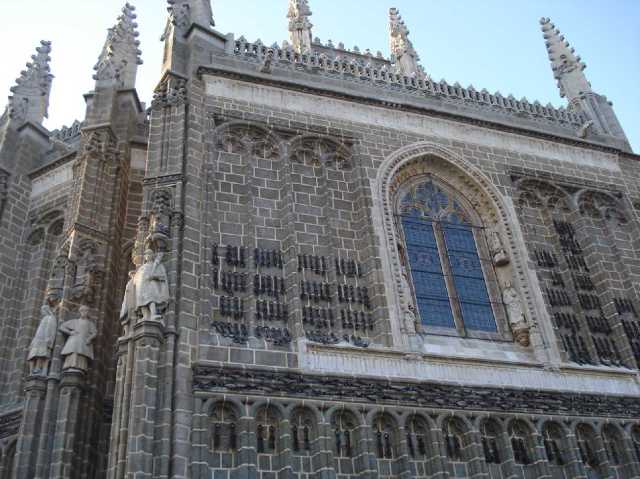 There are three bridges across the gorge now but for centuries there was just this one, which saw some very desperate fighting. 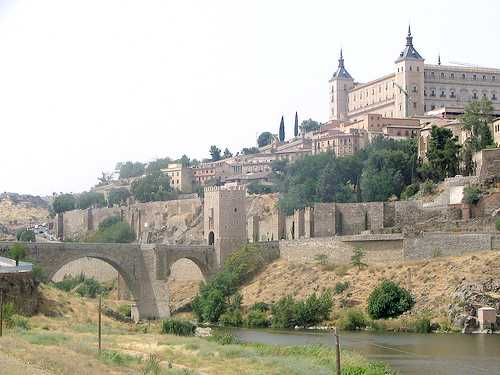 There were little forts at both ends.

On the hill above it there is an old castle, San Servando. It is mentioned in the great epic poem about El Cid.

A few years after his conquest of Toledo, he spent the night there before coming to a trial in Toledo, when three of his men challenged three of his enemies to a jousting duel. Now San Servando is a youth hostel.

These ruins in the park, what are they? 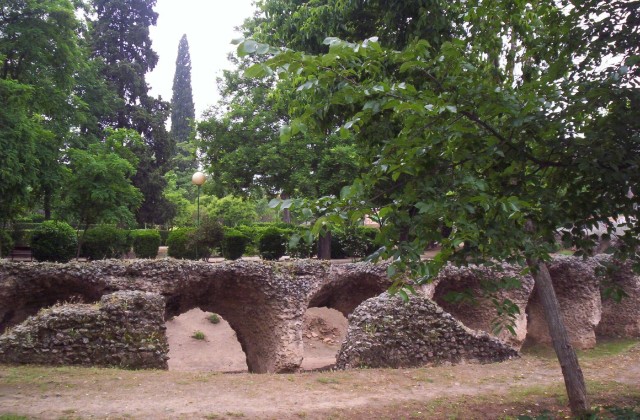 The remains of the old Roman Circus (racetrack) grandstands. They were made of poured concrete and they are so hard the weather alone could never have destroyed them.
There were chariot and horse-races in Toledo until they were prohibited in the fourth century.
Did the Romans found Toledo?  No.  But the first mention of it anywhere is in Roman archives. General Marcus Fulvius Nobilior took it away from the Carpetani in 190 BC.

There is so much to see in Toledo that few have time on their first visit to stop in at the Santa Cruz Museum.

What’s there?  Things like two dozen brilliant El Greco paintings and the immense banner that hung from Don John of Austria’s flagship during the Battle of Lepanto.

In fact, most tourists spend much of their day in Toledo buying swords and other curious souvenirs or eating lamb or suckling pig in one of the old restaurants. When they get back to the hotel they read up on the city and learn how important Toledo was in Spanish and even world history.

Here in town St. Isidore  converted the Visigoth King Recaredo to the Catholic faith (the Visigoths had all been Aryan, i.e. heretical, Christians) and the Translators of Toledo instituted by Alfonso X brought the classical world back to Europe through Arabic documents.

Because Toledo was the capital of Spain for centuries, the court and Church center, all the official records were here and so more is known about Toledo than any other city in Spain and few in the world.  This post has featured only some of the highlights.

Read about a beautiful pleasure palace a Moorish king built for his daughter in Toledo.

There is a street in old Toledo named Toledo, Ohio, after her American sister city:

See this interactive, panoramic view of the city and her monuments. It’s the next-best thing to being in Toledo.