Where Great Westerns Were Filmed

Drive a few miles north of Almería in Spain and things start to look oddly familiar, even if you come from Cleveland or Glascow.

The Tabernas Desert is genuine cowboy country–gray, dusty, barren hills that make your mouth dry just to look at them. Remember how hot and dusty Lee van Cleef and Clint Eastwood looked in A Fistful of Dollars and The Good, the Bad, and the Ugly?
Those movies were filmed here, along with a hundred others. This was where Sergio Leone shot his Spaghetti Westerns.  (See movie excerpts here.)

But Tabernas might look familiar because of other movies too, not just westerns. Remember the hills of Arabia in Lawrence of Arabia ? Those were Tabernas hills. And the strange barren mountains the little troop marches through at the beginning of Indiana Jones and the Last Crusade and the train races through at the end? Tabernas mountains. You might remember backgrounds from Cleopatra, Doctor Zhivago, Patton, The Wind and the Lion, and many others too. They were all shot in Tabernas.

And now a great treat: from the highway you suddenly see a real Far-West town, like the ones in all the movies. For a moment as you drive down the dusty lane and lose sight of it you wonder did you see right. 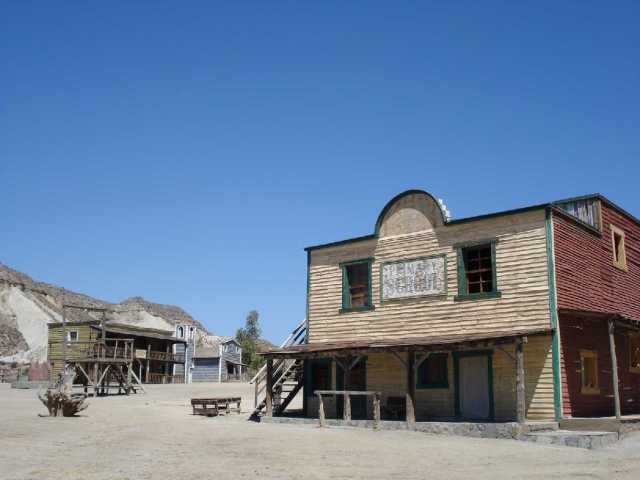 There was an old wooden church, a saloon, a barber’s, a blacksmith’s, even Indian teepees outside of town. A gallows too! 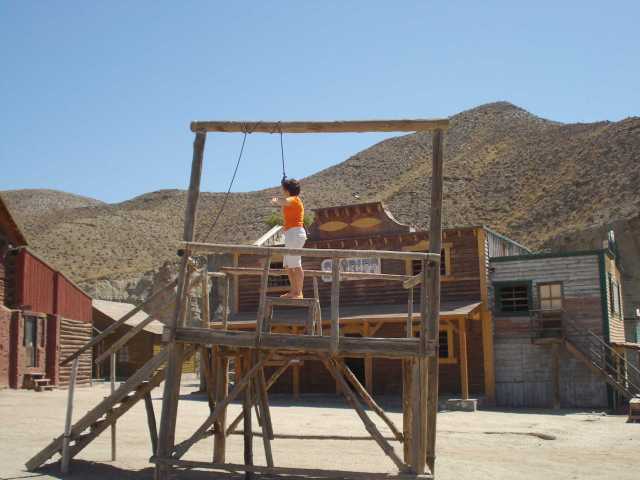 But then when you reach the gate there is no doubt: a cowboy walks up to your car and draws a Smith and Wesson on you. “Welcome, folks!” he says with a poker face. “There’s a show at 12 and another at 1. We hope you’ll stick around. We’ll meet you at the saloon.” 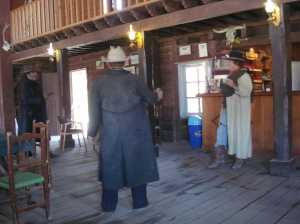 Read here about an exciting visit to one of the theme parks in Tabernas.

“I went to Mini-Hollywood, the longest established of three theme parks existing in the area…Its heart is a Wild-West set, what one critic calls “your standard Spaghetti-Western town.” And most of it is deliciously, authentically false-real, phony buildings that were actually used in films…”

Tabernas is on the N-340, less than an hour’s drive from Almeria, Spain. 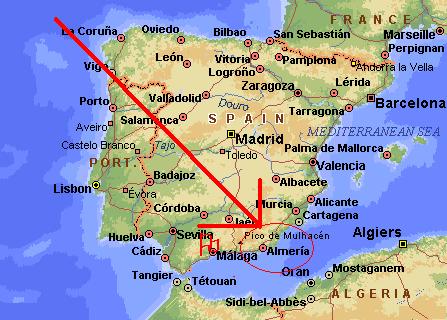 See more photos and read this article if you can in the Spanish newspaper El País.

11 Responses to Where Great Westerns Were Filmed