See him: the tough old general swimming for his life, keeping under water as much as he can while the arrows splash all around him in the water.
He holds his notes in the air.  A general needs his papers.

And where is his scarlet robe—the one he always wore in battle so his soldiers would recognize him?

Perhaps he gave it to an aide before hopping off the little boat, which was sinking because too many soldiers were jumping into it. The historian Appian says the Alexandrians captured the robe and hung it up as a trophy.

How did he get into such a mess?  Where was he going?

He was making for one of the larger Roman ships that lay farther out.
As soon as he reached it, he ordered them to send lifeboats back to save as many men as they could. He had lost the battle.

He was trying to control the harbor of Alexandria, to close one of the exits to enemy ships. His troops from Syria would be coming in and he had to make sure they would land safely.

He and his soldiers were in real trouble.  They were boarded up in a corner of the city, trying to hold off the attack of the entire Egyptian army.  There wasn’t enough food and even their drinking water was poisoned.
They had only one chance of surviving: reinforcements from Syria. He had sent out a call for more troops  as soon as he arrived in Alexandria, and now they were on their way and he had to secure the harbor for them and keep command of the sea.

But how could he do that if he had only a few men and boats?

To start with, he set fire to the Egyptian warships in the dockyards—that was the only way to prevent their being used against the incoming Roman troop ships.  There were perhaps a hundred, many of them huge quadriremes and quinqueremes,  fully equipped for battle.  (The fire got out of control and burned down the most valuable building in the world: the Library of Alexandria, with its five hundred thousand scrolls.)

Then he hurried to seize the causeway  that led from the docks to the Island of Pharos, where the Great Lighthouse stood.  There was an opening in the causeway for ships to pass through on their way out to sea.  He built a little fort there and began filling the passage with big rocks to block it. The Alexandrians came to resist him with all their might. 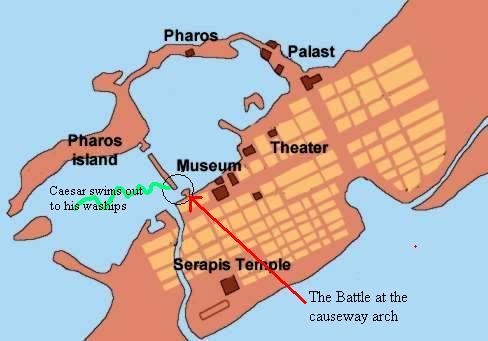 To fight them Caesar quickly landed more troops from boats along the causeway but there wasn’t enough room for so many soldiers to deploy and they stumbled over each other and blocked their own retreat as the enemy came charging. They all ended up jumping back into the little boats.

Caesar himself describes the moment of great danger [he writes of himself in the third person] : “As long as he was able by exhortation to keep his men by the bridge [over the opening] and the fortification, Caesar was exposed to the same danger; when he saw that they were all giving ground, he withdrew to his own vessel.  He was followed by a crowd of men who began forcing their way on board and made it impossible to steer the ship or push it off from land; whereupon Caesar, who had guessed that this would happen, jumped overboard and swam out to the ships standing farther off. From there he sent small boats back to pick up his men in difficulties and saved a considerable number.  As for his own ship, it sank under the pressure of numbers and was lost, with all the men on board.” (Civil War 21.6)

And the little detail of his holding his papers out of the water as he swam?

That comes from Plutarch. He calls it a “story” to show that he took it only for what it was worth, viz., the color.  “This was the time when, according to the story, he was holding a number of papers in his hand and would not let them go, though he was being shot at from all sides and was often under water. Holding the papers above the surface with one hand, he swam with the other.”
(Life of Caesar, section 49)