How would you like to rule the world?
Charles V ruled it—the best part of it, which included Western Europe and America. 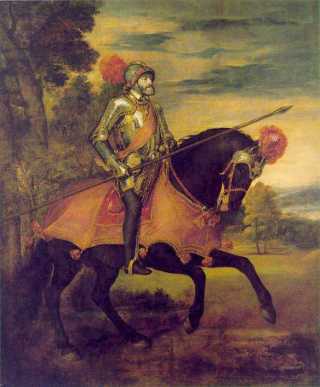 Charles V at the Battle of Mühlberg by Titian

He worked and worried day and night for forty years and then threw in the towel. “Don’t imagine that the pleasure of ruling so many peoples…isn’t mixed with… bitterness and linked with trouble,” he told his son. “If you weigh in a fair balance on the one hand the prerogatives and preeminences of sovereignty, and on the other the work in which it involves you, you will find it a source of grief rather than of joy and delight. But this truth looks so much like a lie that only experience can make it believable.”

Charles was a particularly gifted ruler. He was smart and brave and hard-working. But those qualities weren’t enough to make him successful except now and then and only for a short time. The French King Francis I tried to take his possessions; the Turks assembled great armies to seize the Mediterranean and Eastern Europe; the Lutherans split up the Church.

He fought plenty of wars and he won a few; but his failure to recapture the city of Metz in 1552 got him down. He was worn out, tired, achey. “I’ve had it,” he told himself. “Let someone else take the helm.”

Where did he go? To one of the beautiful cities of his kingdom? To the Blue Coast to watch the waves?

No. He went to a little monastery in an oak forest in Spain. It was a dinky Hieromite monastery called Yuste with no more than twenty cloistered monks. They must not have believed their ears when the prior announced to them that the emperor was coming and not just for a visit. 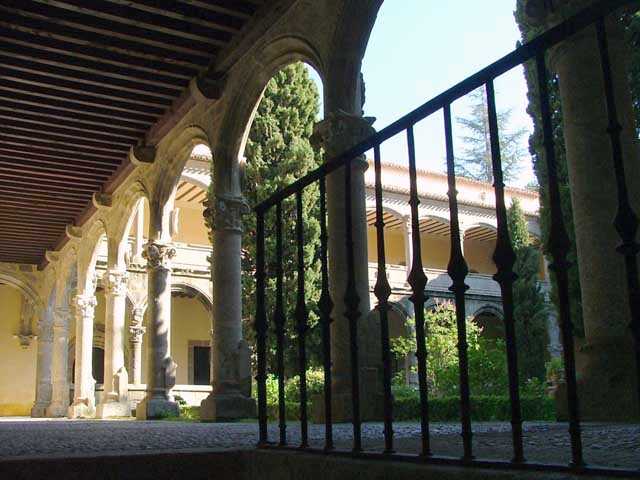 The cloister of Yuste

Why did Charles go to a monastery?

He wanted to spend his final years preparing his soul for eternity. After all, he believed he would have to give an account to God of his stewardship and he wanted to work, so to say, on its presentation.
He had never had much time to stop and think. When he took over Spain at twenty it was as though he had hopped onto a coach that set off at a gallop and never stopped or slowed down. He rode right through the world, right through life. There was barely enough time to try to understand the conflicts he met before he was asked to solve them, to act. Then, almost before he knew it, they were far behind him and new ones were in front. A thousand times he would have liked to tell the driver to stop and let him go over what he had done or get a better look at the wonderful things he saw passing by the window; but there was no driver.

They built a little annex for him at the monastery. It was a two-storey building but his quarters  were as small as a modern apartment and not half as comfortable. The tapestries covering the walls were fine art but they didn’t keep out all the draft. And besides, the emperor ached all over. He had gout. The court carpenters under orders from his doctors made him a special chair so he could raise his legs while sitting but he got relief only occasionally. There was a passage leading from his living-room to the altar of the chapel. At first he walked over to Mass every day. Later, when it became too painful for him to move, he just watched through the open doors.
After only eighteen months he died. They buried him in the courtyard, the emperor of the world.

Now his body is in the famous crypt of the Escorial with all the Spanish kings since his day. His son Philip II built that huge palace-monastery in the mountains near Madrid.
The monastery of Yuste, burnt down by Napoleon’s troops, was rebuilt in the last century, and the emperor’s rooms restored. You see it just as it was in his time.

Charles V at Yuste by Delacroix

Some say the truth of Yuste was that the Emperor didn’t lead a simple, monastic life but that he spoiled himself. He painted and listened to music and fished and ate like a pig. But a drive up through the woods of Cuacos and a visit to Charles’ rooms will show you their inadequacy for worldly delights.

Lately Yuste has become a symbol of Europeness and the Spanish government has created a European Academy of Yuste which awards a yearly Charles V European Prize.
Here is the 2007 prize-winner, the Bulgarian Tzvetan Todorov, entering the chapel. This year’s winner is the French politician Simone Veil.

At the monastery, Charles met a son of his for the first time. Read about it in The Emperor Meets His Natural Son.

10 Responses to Charles V Quits and Goes to Yuste