The Cicero You Never Knew

Name me a great Roman.

Good.  Name me another one.

And Cicero?  Do you know what one scholar says about him?
“The influence of Cicero upon the history of European literature and ideas greatly exceeds that of any other prose writer in any language.” (Michael Grant)

But is that true?  He was just some orator, wasn’t he? 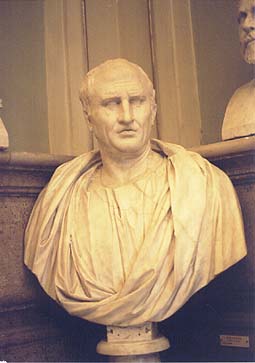 He is quoted (or was) in most of the controversies on law, politics, religion, education, literature, and philosophy that there ever were.

What do they quote?

His speeches such as Against Verres (an attack on misgovernment), the Philippics (an attack on tyranny). But even more, his essays like On Duties, On Old Age, and On the Nature of the Gods.
All the great thinkers and writers of Europe studied and imitated those for more than a thousand years. St. Augustine, St. Isidore, Thomas of Aquinas.

And then on a spring morning in 1345 Petrarch rediscovered his letters. And started the Renaissance.
“The Renaissance was above all things a revival of Cicero, and only after him and through him of the rest of Classical antiquity.” (Zielinski)

What the devil was so great about his letters?

“We may search history until quite modern times without finding either a personality so intimately known to us as Cicero or a period so vividly real as the years that led up to the murder of Julius Caesar in 44 BC,” says L.P. Wilkinson in his translation of Cicero’s letters. “Both of these facts are due to the survival of nearly eight hundred of Cicero’s letters, together with more than a hundred written to him by others.”

But why didn’t somebody ever tell us about him?

Until the twentieth century high-school and college students all knew him. They called him Tully. They read  Contra Catalinam and On Old Age in Latin class and On Duties (“Tully’s Duties”) in philosophy.
In our time Cicero was thrown out  with the rest of classical studies.

But that was right, wasn’t it?  That’s all so far back. Those old subjects are of little relevance anymore. Philosophical speculation seems like just a word game.
In any case, I don’t want someone to tell me what my duties are.  I want to be free.

Then you might read Tully to see how best to do that.

How to be free?

Exactly. That was the biggest concern of his life. He lived through a civil war and couldn’t decide what to do—exactly the same dilemma people have had all through our last century in Europe, South America, Asia and Africa, and many still have today.  The one between inefficient freedom and efficient dictatorship.  Cicero finally stood up to the tyrant and got himself killed for it, knowing that might happen.

You might also read his letters.  There’s nothing like them.  They shocked old Petrarch when he found them; they turned him off. They show such flagrant shortcomings and were so different from the saintly Cicero legend.  “THIS was the real Cicero?  But we thought he was perfect?”

See The Cicero You Never Knew 2 and meet one of the most fascinating men who ever lived. He was so vain he was funny; a brilliant wisecracker but he never knew when to shut up; a hero who was a scaredy-cat; Rome’s greatest orator but he sometimes got so nervous he shook when he had to speak.  He was so effective a speaker that he could spellbind great audiences, win hopeless cases, and bring tough men like Julius Caesar to tears.

11 Responses to The Cicero You Never Knew