One of the most impressive Roman constructions you will ever see is the aqueduct of Segovia, Spain. 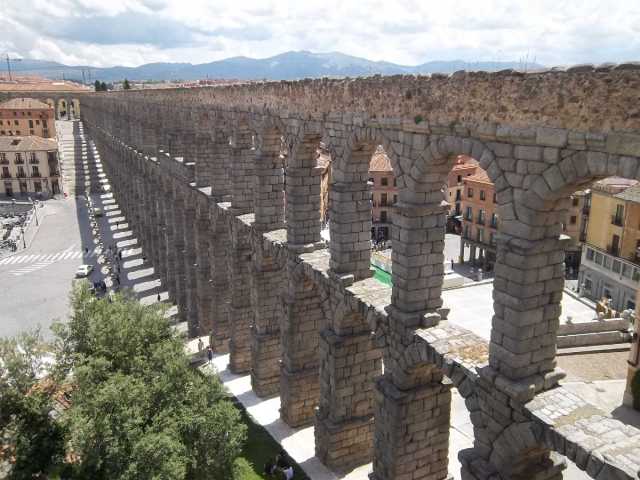 It still brings good water down from the mountains fifteen kilometers away. For most of that distance the closed canal rides on a low wall of Roman concrete. Then for the last kilometer, to cross the valley where Segovia lies, it is supported by great pillars and arches of stacked stones—granite blocks so perfectly hewn that no mortar was needed to hold them in place. By the time the canal crosses the main square of town it is more than 100 feet above the streets and, if you are seeing it for the first time, it takes your breath away.

The canal is rectangular and its inner walls are smoothed with fine morter. The typical Roman inclination for a water course like that was a mere one per mil—considered enough to make up for the slowing down from friction as the water flowed through.

When was the aqueduct built? No one knows exactly—facts like that often go under in a land so old and where so much has happened. But recently the archaeologist Geza Alfoldy, a specialist in epigraphy, may have found out. How? Originally there were Latin inscriptions on the aqueduct. They were formed with bronze letters and held in place by drilling holes into the blocks. The holes are still there. For Alfoldy, those holes are as good as the letters; by comparing other monuments with known inscriptions he has decided which letter needed which holes. The Latin writing was the same on both sides of the aqueduct, with slight variation, so Alfoldy used the one side to confirm his reading of the other. He proposed the following:

If Alfoldy is right, this means, judging by the titles given to the Emperor Trajan, that the inscription was posted on the aqueduct in 98 AD.

Why did the Romans build aqueducts over valleys? It is sometimes said that had they known the principle that water meets its own level they would not have needed to build them. They would merely have brought their canals to the brink of the valley and then, instead of constructing a complex and expensive aqueduct, led the water through a simple pipeline down to the bottom of the valley and back up the other side until it was on a level with the canal, and so could continue its flow.

But this is to insult the Romans. They knew the principle very well (the siphon) and made good use of it in countless places to cross valleys and rivers. A famous example was the siphon channel at Lugdunum, capital of Gaul (near Lyons, France). The pipes were sometimes made of lead, as at Caesaraugustus (Zaragoza, Spain), where one 32 cm. in diameter crossed the wide Ebro River before reaching the city. Most of these were long ago melted down for other purposes. But others were clay and even stone, as at Sexi, Spain, and have survived. 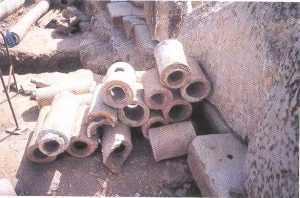 and stone pipes used for the siphon at Sexi, Spain

(photos and illustration from the catalog of an exhibition at the Museo Arqueológico Nacional, Madrid, in March-July 2002:  Artifex: Ingeniería Romana en España by Ignacio González Tascón

The plan of a Roman siphon, here leveled off at the bottom of the valley

Then why was the aqueduct of Segovia necessary? Couldn’t a siphon have been used?
Perhaps an aqueduct was considered easier to maintain than a siphon channel, perhaps the terrain was not suitable. You may be quite sure the engineers did not build the aqueduct out of ignorance. They will have studied other bridges and aqueducts of all kinds before deciding on this amazing monument. Perhaps its very monumentality was the determining factor.

What are those holes in the old stones? See How Did They Lift Those Stones? 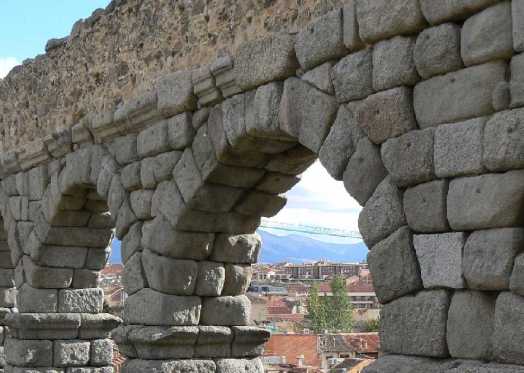