A White Fawn Whispers to Sertorius

One morning a hunter brought a snow-white fawn into camp and presented it to Sertorius.

Sertorius smiled to see such a beautiful and curious animal. He was happy for a gift like that from the Lusitani. He needed all the support he could get.

He had it tied to his tent. In time it became tame and gentle and he let it follow him around camp. It obeyed his orders—it came when he called and walked off when he told it to leave. Somehow it didn’t mind all the uproar of camp, all the thousands of soldiers. It listened only to Sertorius.

He was astute. Not for nothing was he known as the Roman Hannibal. Probably already as soon as the white deer began following him around he had the idea to say it came from heaven, from the goddess Diana, and that it talked to him and revealed her secrets. The Lusitani were all superstitious—it was easy to get them to believe a story like that.

Whenever he received secret information, he said the deer had whispered it to him. If news came to him that the enemy had made an incursion into his territory he told his men to arm themselves, that the doe had warned him in a dream of an imminent attack. When he heard of or suspected some mutiny or treachery among his soldiers, he said the fawn told him to be on the lookout. And when news reached him of the victory of one of his generals, he hushed the messenger and brought out the doe all covered in garlands. “Good news,” he announced to his soldiers. “Blessed news. Let us offer sacrifice to the gods because good fortune has come our way. I’ve been told.” And he turned to the fawn, who looked back at him with great, loving eyes.

“By these devices,” says Plutarch, “he made the people tractable, and so found them more serviceable for all his plans; they believed that they were led, not by the mortal wisdom of a foreigner, but by a god.”

Meanwhile, everything began to go well for Sertorius and his army of Lusitani barbarians. His power grew and grew. He had started out with only a handful of real Roman soldiers and a motley band of Libyans from Africa. In Lusitania (modern Portugal) he picked up four thousand targeteers and a few hundred horsemen. That was all—that was his army.
With that he waged war against four Roman generals and one hundred and twenty thousand foot-soldiers, six thousand horsemen, and two thousand archers and slingers. Most of the cities in Spain were hostile too and closed their gates to him.
“But nevertheless, from so weak and slender a beginning,” says Plutarch, “he not only subdued great nations and took many cities, but was also victorious over the generals sent against him.”

Who was this Sertorius anyway—and what was he doing fighting on the side of the barbarians against the Romans, his own people?

There was a civil war going on in Italy.

A general named Sulla, after winning a great victory in the East, had come back to Rome with his army and started killing his adversaries. He was on the side of the senate and the old patrician families. Sertorius was a leader of the other side—the people’s party. He had to flee or be murdered. For months he was on the run all over the Mediterranean and Africa. Finally he accepted the call of the Lusitani to be their leader and he began organizing an army.

He began organizing a second Rome, a more just Rome, from Spain. His reputation as a fearless soldier and a great leader had already spread over Hispania. He knew how to win the confidence of his men with shows of clemency and also frequent victories. Yet his situation was always very precarious. 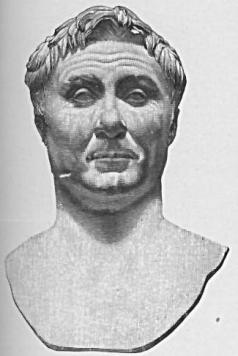 Now Pompey,  the greatest Roman general of all, had come to Hispania with a vast army to end his revolt.

And just when Sertorius needed all the help he could get to keep his army confident, an aide announced that the doe was gone. No one had seen it for days.
Yet Sertorius was lucky one more time. Some men found the doe wandering in the hills at night and brought it to him. “Keep this quiet,” he told the men, and paid them good money.

He hid the doe and allowed a few days to pass. Then one morning he came out of his tent with strange cheerfulness and strode to the tribunal, where he did his daily business. “I’ve had a wonderful dream,” he told the barbarian leaders. “Great good fortune is on the way.”
Then he climbed up onto the tribunal and began to work.

“And now,” says Plutarch, “the doe was released by her keepers at a point close by. She spied Sertorius and bounded joyfully towards the tribunal, stood by his side and put her head in his lap and licked his hand as she had always done before. Sertorius returned her caresses appropriately and even shed a few tears, whereupon the bystanders were struck with amazement. Convinced that Sertorius was a marvellous man and dear to the gods, they escorted him with shouts and clapping of hands to his home, and were full of confidence and good hopes.”

Read more about They Called Him the Roman Hannibal

5 Responses to A White Fawn Whispers to Sertorius