A Legendary Speaker by Mark Twain

This is Mark Twain’s unforgettable description of an Iowa “erratic genius” and the legendary speech he gave to an audience in Keokuk.  It begins:

Keokuk, a long time ago, was an occasional loafing place of that erratic genius, Henry Clay Dean. 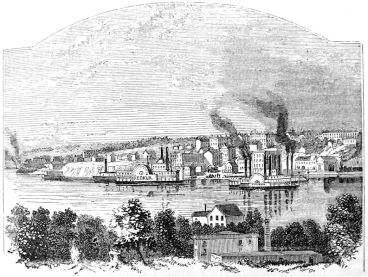 I believe I never saw him but once; but he was much talked of when I lived there. This is what was said of him:

He began life poor and without education. But he educated himself—on the curbstones of Keokuk. He would sit on a curbstone with his book, careless or unconscious of the clatter and the tramp of the passing crowds, and bury himself in his studies, never changing his position except to draw in his knees now and then to let a dray pass unobstructed; and when his book was finished, its contents, however abstruse, had been burned into his memory, and were his permanent possession. In this way he acquired a vast hoard of all sorts of learning, and had it pigeon-holed in his head where he could put his intellectual hand on it whenever it was wanted.

His clothes differed in no respect from a “wharf-rat’s”, except that they were raggeder, more ill-assorted and inharmonious (and therefore more extravagantly picturesque), and several layers dirtier.  Nobody could infer the master-mind in the top of that edifice from the edifice itself.

He was an orator—by nature in the first place, and later by the training of experience and practice.  When he was out on a canvass, his name was a lodestone which drew the farmers to his stump from fifty miles around. His theme was always politics.  He used no notes, for a volcano does not need notes. In 1862 a son of Keokuk’s late distinguished citizen, Mr. Claggett, gave me this incident concerning Dean:

The war feeling was running high in Keokuk (in ’61), and a great mass-meeting was to be held on a certain day in the new Athenaeum. A distinguished stranger was to address the house. After the building had been packed to its utmost capacity with sweltering folk of both sexes, the stage still remained vacant—the distinguished stranger had failed to connect. The crowd grew impatient, and by and by indignant and rebellious. About this time a distressed manager discovered Dean on a curbstone, explained the dilemma to him, took his book away from him, rushed him into the building the back way, and told him to make for the stage and save his country.

Presently a sudden silence fell upon the grumbling audience, and everybody’s eyes sought a single point—the wide, empty, carpetless stage. A figure appeared there whose aspect was familiar to hardly a dozen persons present.  It was the scarecrow Dean—in foxy shoes, down at the heels; socks of odd colors, also “down”; damaged trousers, relics of antiquity and a world too short, exposing some inches of naked ankle; an unbuttoned vest, also too short, and exposing a zone of soiled and wrinkled linen between it and the waist-band; shirt-bosom open; long black handkerchief wound round and round the neck like a bandage; bob-tailed blue coat, reaching down to the small of the back, with sleeves which left four inches of forearm unprotected; small, stiff-brimmed soldier-cap hung on a corner of the bump of—whichever bump it was.

This figure moved gravely out upon the stage, and with a sedate and measured step, down to the front, where it paused, and dreamily inspected the house, saying no word.  The silence of surprise held its own for a moment, then was broken by a just audible ripple of merriment which swept the sea of faces like the wash of a wave. The figure remained as before, thoughtfully inspecting. Another wave started—laughter, this time. It was followed by another, then a third—this last one boisterous. 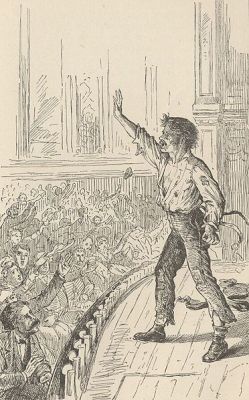 And now the stranger stepped back one pace, took off his soldier-cap, tossed it into the wing, and began to speak with deliberation, nobody listening, everyboy laughing and whispering. The speaker talked on unembarassed, and presently delivered a  shot which went home, and silence and attention resulted. He followed it quick and fast with other telling things; warmed to his work and began to pour his words out, instead of dripping them; grew hotter and hotter, and fell to discharging lightnings and thunder—and now the house began to break into applause, to which the speaker gave no heed, but went hammering straight on; unwound his black bandage and cast it away, still thundering; presently discarded the bob-tailed coat and flung it aside, firing up higher and higher all the time; finally flung the vest after the coat; and then for an untimed period stood there, like another Vesuvius, spouting smoke and flame, lava and ashes, raining pumice-stone and cinders, shaking the moral earth with intellectual crash upon crash, explosion upon explosion, while the mad multitude stood upon their feet in a solid body, answering back with a ceaseless hurricane of cheers, through a thrashing snow-storm of waving handkerchiefs. 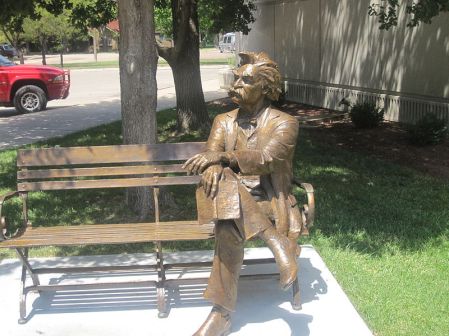 2 Responses to A Legendary Speaker by Mark Twain