Pliny the Younger didn’t know what to do with the Christians.

The Emperor Trajan had appointed him governor and sent him to Bithynia in 112 AD. His job was to go out there and solve the problems that arose; and if he had any doubts he was supposed to write back and ask for advice.

“I have never been present at an examination of Christians,” he wrote to Trajan. “Consequently, I do not know the nature or the extent of the punishments usually meted out to them, nor the grounds for starting an investigation and how far it should be pressed….

“For the moment this is the line I have taken with all persons brought before me on the charge of being Christians. I have asked them in person if they are Christians, and if they admit it, I repeat the question a second and third time, with a warning of the punishment awaiting them. If they persist, I order them to be led away for execution; for, whatever the nature of their admission, I am convinced that their stubbornness and unshakeable obstinacy ought not to go unpunished…

Cover of a book by John Beckwith,  showing an early Christian depiction of The Last Supper.

“I considered that I should dismiss any who denied that they were or ever had been Christians when they had repeated after me a formula of invocation to the gods and had made offerings of wine and incense to your statue (which I had ordered to be brought into court for this purpose along with the images of the gods), and furthermore had reviled the name of Christ: none of which things, I understand, any genuine Christian can be induced to do…..

“[Some declared] that the sum total of their guilt or error amounted to no more than this: that they had met regularly before dawn on a fixed day to chant verses alternately amongst themselves in honor of Christ as if to a god, and also to bind themselves by oath, not for any criminal purpose, but to abstain from theft, robbery, and adultery, to commit no breach of trust, and not to deny a deposit when called upon to restore it. After this ceremony it had been their custom to disperse and reassemble later to take food of an ordinary, harmless kind; but they had in fact given up this practice since my edict, issued on your instructions, which banned all political societies. This made me decide it was all the more necessary to extract the truth by torture from two slave-women, whom they call deaconesses. I found nothing but a degenerate sort of cult carried to extravagant lengths.” 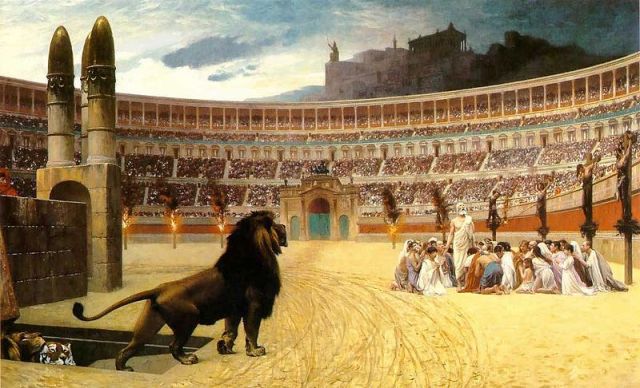 “I have therefore postponed any further examination and hastened to consult you. The question seems to me to be worthy of your consideration, especially in view of the number of persons endangered…It is not only the towns but villages and rural districts too which are infected through contact with this wretched cult. I think though that it is still possible for it to be checked and directed to better ends, for there is no doubt that the people have begun to throng the temples which had been almost entirely deserted for some time…It is easy to infer from this that a great many people could be reformed if they were given an opportunity to repent.”

8 Responses to Early Christians and a Conscientious Roman Governor