The Cicero You Never Knew 2

Educated Romans knew Greek. It was the language of culture. You needed it to talk about art, literature, philosophy.

The greatest ancient poet: Homer, quoted for a thousand years.  Roman copy of a lost Hellenistic original of the 2nd c. BC. From Baiae, Italy (public domain photo by JW1805)

They had real Greeks around as tutors, some as slaves, some as celebrities like Polybius and Plutarch;  and they spoke Greek even with their friends and at society gatherings.

Both Cicero and Caesar were fluent in Greek.  And both went over to Greece as young men to study and perfect themselves. Caesar was there for more than a year and Cicero for almost three.

Greece was full of professors with varied reputations and Roman students went to study with one or another of them on recommendation.  Some had schools, like Plato’s or Aristotle’s academies, but most taught privately.  Cicero studied with several and even travelled to Asia Minor and Rhodes to find the best ones. He had a good mind and was enthusiastic about every facet of philosophy, literature, and art.  He was ambitious too.  His great aim was to become a great advocate in Rome.  For that he needed to improve his oratory. 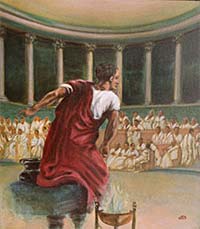 His Rhodes teacher, Apollonius, didn’t speak any Latin and asked Cicero to declaim for him in Greek, which Cicero was glad to do.  He delivered his speech and impressed everyone with his fine style. They all ran up to congratulate him afterwards—all except the teacher Apollonius.  He hadn’t shown any signs of approval during Cicero’s performance and now, amid the general applause, he just sat there looking displeased. Cicero couldn’t take that.  He thought he had done well. He was the kind of man who later actually bawled people out for not showing their appreciation for him.
Finally, all apprehensive, he went up to Apollonius.  “Didn’t you like my delivery?”
“Oh, yes,” said Apollonius, glumly. “You were wonderful. My congratulations. I’m just sorry for Greece. The only glories that were left to us were our culture and our eloquence. Now I see that even these two are going to pass to Rome through you.”

Cicero went on to become the most important orator in Roman history. He couldn’t have done it without his training in Greek rhetoric.

[Apollonius next had Caesar as his student.  They say Julius was the second best orator in all of Roman history, so old Apollonius must have fallen into actual depression when he heard  Roman Number Two work out at the podium.]

This story is from Plutarch’s Life of Cicero

Back to The Cicero you Never Knew 1

6 Responses to The Cicero You Never Knew 2