In 711 an army of Muslims crossed the Strait of Gibraltar and overran Spain.

They took the whole peninsula except for a strip of kingdoms in the north and northwest. 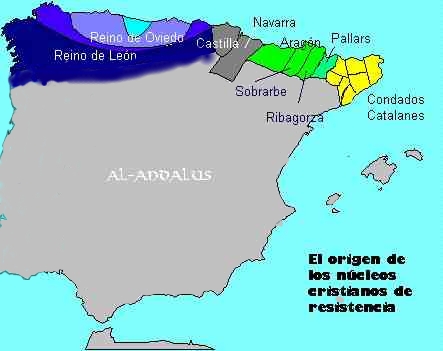 Next they crossed the Pyrenees and went for France.  If Charles Martel hadn’t stopped them at the Battle of Poitiers (732) who knows how far they would have gotten.

They settled down for good in Spain and set up an empire in the fertile south, with centers at Cordoba and Granada. This was the famous Al-andalus that the Arabs remember with nostalgia to this day.  Ask Bin Ladin.

Now the Christian kings in the north, from cities like Leon and Burgos, began the job of driving the Muslims (called Moors) back out of Spain.    It would take them 700 years to accomplish, and innumerable battles. Historians call this time the Reconquest.

When El Cid  was born (1040?) those Christian kings and knights had regained about a third of the peninsula.

But not for good.  There was constant fighting and cities often changed hands.  Life was unbelievably hard, even for a king.  He had to put on armor and draw his sword and fight personally in desperate battles. His soldiers were the noblemen of his kingdom, who grew up training to swing a sword and charge on horseback with a lance.

El Cid was one of those noblemen. He was raised in the court of King Fernando of Castilla and Leon. He received a good education, which included Latin and French classes, literature, mathematics, and law. He may have sat side by side in school with the two princes, Alfonso and Sancho.

King Fernando died  and the throne went to young Sancho.  El Cid fought his first battles for him and earned himself a reputation as a fearless battler. He got along well with his new king and friend.

The Moors weren’t the only ones who caused trouble. Princes will be princes and Alfonso was jealous of his brother Sancho, the new king.  He murdered him, or probably did, and got the throne for himself. All of Castile, including El Cid, suspected that Alfonso was behind the murder. Before they kissed his royal hands the legend is that El Cid made him swear before God that he had had nothing to do with the crime. Made him swear in church filled with his subjects, once, twice, three times. 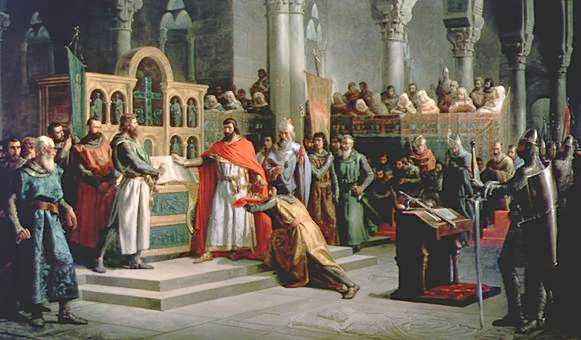 The Oath of Santa Gadea

This humiliation would have been enough to make Alfonso hate El Cid.  But when the main source of the Cid legend, the great epic poem El Cantar de Mio Cid starts out, the King has exiled him for another reason: keeping booty that should have gone into the royal arks.  What—El Cid a crook?  Impossible.  He is the very picture of rectitude.