Roman ships had no rudder. The rudder was a medieval invention. Before that, all the ships were steered with two oars dragging at the back of the ship—one on the starboard and the other on the port side.

Sails were made of thick linen or animal skins sewn together. They were often tinted brown with oak-tree bark. 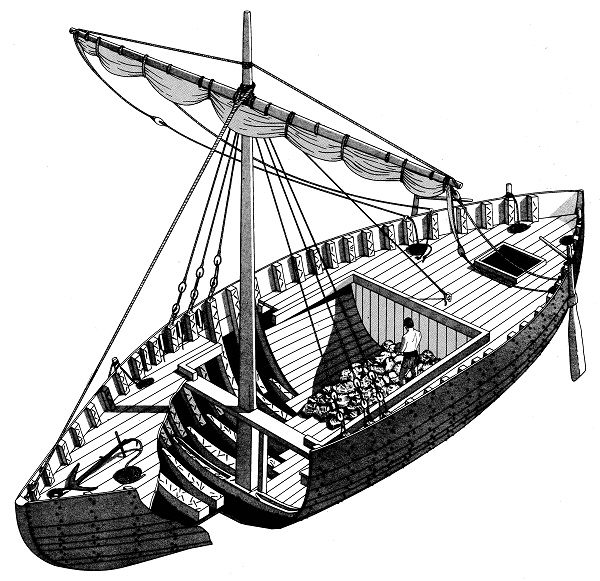 Blackfriars ship
This Roman ship was discovered by Peter Marsden in 1962 in the bed of the River Thames, off Blackfriars in the City of London, and excavated in 1962-1963. Read about it here.

Ships carried two wooden figures as identification and tutelage. On the prow was the insignia—a figure or symbol that represented what gave the ship its name—a swan, a lady, an eagle. And on the stern, on top of the poop deck, was the tutela, the god or talisman that protected the boat.

This is a Roman war ship–a trireme: 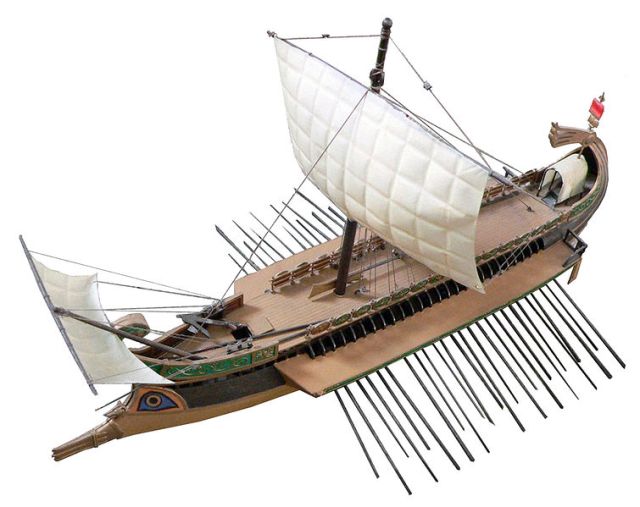 The arrival of great ships was really something to see and people in those times gathered to watch them approach. Look how Seneca describes the excitement:
“Today the ships from Alexandría suddenly came into sight. Those are the ones they usually send ahead to announce the arrival of the big fleet. They call them navae tabellariae, herald ships, and the people of Campania just love to see them. The whole population of Puteoli crowds onto the breakwater identifying the Alexandrian ships by their broad sails….”
from Epistulae Morales ad Lucilium, Letter LXXVII, translated by Robin Campbell 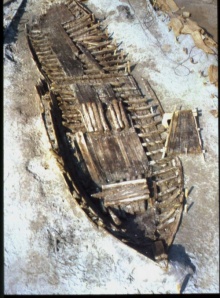 Read about this here.

See also this great post on super-warships in the Hellenistic Age.

Romans were strictly landlubbers for centuries. They knew nothing about the sea. Their first five hundred years they spent fighting for their lives with their neighbors. They worked their way down the peninsula and the day finally came when they reached the Toe and realized they had beaten every last enemy. They were the kings of Italy. Cheers went up. They threw their shields into the air. They danced. But suddenly somebody called and told them all to come and look out over the sea. It was full of Carthaginian ships and those disgusting sailors were mocking the Romans and giggling themselves sick. The Carthaginians controlled the sea.
“Let them come here and laugh like that,” said one Roman soldier.
“Yeah,” said another.
“They don’t need to come here,” said a third. “They can f— us by blocking our food imports with Greece.”
“Well then we’ll just have to go out there and get the bastards,” said the first one.
“Yeah,” said the second.
“How?” asked the third. “Can you swim?”
“We’ve got ships,” said Number One.
“Yeah,” said Two.
“What you call ships are nothing but wooden boxes,”said Three, “and the Carthaginian warships don’t even bother ramming them: they just row by and let the waves sink them.”

See The Crow (Part One) and learn how the Romans went out and got the Carthaginians.