This bison is on the ceiling of a cave in Spain called Altamira. 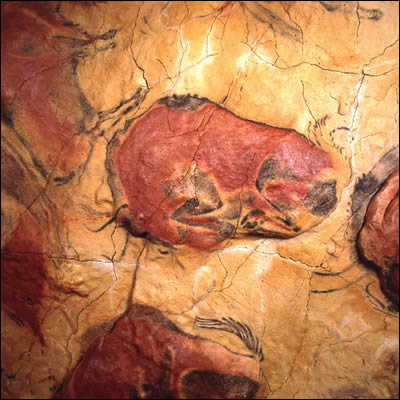 It was painted about 14,000 years ago. Not only is it beautiful, it seems to be charging.
It is one of nearly a hundred figures on that ceiling, which someone has called “the Sistine Chapel of prehistory”.

The figures are drawn in a style that looks modern to us, like some of the graphic experiments of the twentieth century. Picasso himself came out of the cave impressed: “After Altamira,” he said, “all is decadence.”

Most cave drawings are mere outlines but these are filled in with color that varies in intensity, giving them a chiaroscuro effect and even the look of volume. The artist also took advantage of the irregularities in the rock surface to make his figures or parts of them stand out in relief. He was a real master.

Why did he paint the ceiling? Scientists wish they knew.
The figures don’t make a nice composition like Michelangelo’s famous work. They are painted here and there and any which way, some facing one way, some another, in many sizes and scales. The artist seems to have chosen a free area on the ceiling and worked standing in the most comfortable way he could. It was pitch dark in there, remember. He had to work with a torch or an oil lamp. It is hard to imagine how he could have avoided covering the ceiling with soot.

One theory is that the animals had a magic purpose. The artist painted them to scare up the game, as it were; though “game” is a silly word for those days when the hunt was no sport. Or perhaps he painted them to give thanks to an unseen Power for supplying him with food.
It is hard to believe that he painted a pretty animal because he had the artist’s itch. Or because he wanted to adorn his bedroom. The chamber with the paintings is in a part of the cave where no one ever lived.

Yet they are better than mere magic signs. They are based on close observation and streamlined in a way that only a great artist can do.

Another mystery has come up recently. Scientists believe they have discovered that some of those figures were painted thousands of years after others. See that story here (as well as other very interesting posts on art and history). A long dark Ice Age would have passed like a winter; and in the spring of a new Time some artist tried to imitate the Old Master?

13,000 years ago a rock-slide closed the entrance and until 1879 no one ever went in there again. A hole opened up in the ground and a little girl ventured down like Alice in Wonderland. She ran to get her father, an amateur archaeologist. When he told the world what his daughter had discovered, no one would believe him. No prehistoric paintings like those had ever been seen. And they looked suspiciously modern. After a long debate the experts finally withdrew their objections and declared the paintings genuine. After that, people began to visit the Altamira cave in greater and greater numbers until the authorities decided to close it because the paintings showed damage from the moisture and heat that rose from the visitors.
Recently the Spanish government inaugurated a replica of the cave chamber with the paintings. Here is a photo of the event, with King Juan Carlos and Queen Sophia.

The ceiling figures are not the only ones in the cave. Here is a very large deer, 2.25 meters long, painted on the wall of another chamber.

The Altamira cave, which the UNESCO has declared a World Heritage site, is near Santander, the capital of the Autonomous Region of Cantabria in the north of Spain.

This entry was posted in 1. Bookmark the permalink.

13 Responses to The Great Altamira Cave