The Crow: or the First Punic War (Part 3)

The Carthaginians were right: it took time to train sailors and oarsmen and Rome didn’t have time. But that wasn’t the first problem Rome ever had. Rome had been having problems for five hundred years. They believed problems could all be solved with a little thought and a little trial and error. This one was chickenfeed. “While the ships are being built, take the men out on that field and teach them rowing,” ordered the general.

The general didn’t like that kind of objection—one with such an obvious solution. “What is an oar? An oar is a long pole. Get a bunch of long poles—what’s the difference?”

Soon the fields were full of men sitting in rows of five, pushing and pulling on long poles. A pacer pounded on a drum to give them the rhythm.

As soon as the ships were in the water—in only sixty days, if you can believe Polybius— the oarsmen went aboard, hopped onto their benches, and started rowing with real oars. There was no time to lose. They rowed right out to meet the Carthaginian ships.

What about tactics? The Romans had never thought about what sailors did out there on the sea when enemy ships met. They didn’t know or care about fleet tactics and ramming. Their objective, once they came up to an enemy, was to jump on his ship and kill him. There was nothing like the good old sword and shield.

Most oarsmen on those Carthaginian ships weren’t used to hand-to-hand combat. They thought their job was done once their ship had rammed the enemy ship. A few troops on the deck above them took care of the surrender and reduced any of the enemy sailors that resisted.

The oarsmen on the new Roman quinqueremes were all experienced soldiers. They saw themselves not as sailors but as soldiers doing the temporary but necessary duty of marching over the sea to meet the enemy—marching in a strange way: marching by sitting still and rowing, but marching.

“I’ve been wondering how we’re going to board their ships when we get out there?” one of the more imaginative Roman oarsmen asked the others on their way out to meet the enemy.

It’s true: try to jump from one ship to another, even on a calm sea, even without the confusion of battle and arrows and stones flying through the air. The two ships, even with their gunwales side-by-side, don’t go up and down on the waves at the same time; and when you try to jump, the harder you push with your feet to lift yourself off, the farther down you go into your own boat. And the ships don’t stay together for long either.

“We’ll cross that bridge when we come to it,” somebody said. And they did. It wasn’t a bridge but a gangplank.

Now came the kind of practical solution to a problem the Romans were famous for. It wasn’t really an invention. The Romans never invented much. It wasn’t some genius’s brainstorm. And it didn’t occur out of the blue. It came to several men at once probably, because their experience in combat brought them all to the same conclusion. “What we need is some kind of gangplank to carry on our ships,” said the generals. “One we can throw across their deck as soon as we bang up against them. Then our men can run right onto their ship.” A portable gangway was nothing novel. A lot of ships must have carried them and still do. But how do you heave such a heavy thing onto the enemy’s deck from your side, without help? The answer was the “Crow”.

The Romans built a nice long gangplank, four feet by thirty-six, with wooden guardrails. They cut a slot in it at one end and stuck a long pole through the slot. The pole they stood up on deck and fixed solidly like a mast. At the top of the pole they attached a pulley and ran a rope through it down to the other end of the gangplank. By means of that rope they could raise and lower the gangplank. It swiveled around easily because of the loose slot at the base of the pole or mast.

“That is fine as a way of getting our men across,” said the general after he was shown one of these experimental gangplanks. “The hitch I see is that the enemy isn’t going to let the thing lie there on their deck. They’re going to keep pushing it off. We need a way of keeping it in place and also of locking those two boats together. Why don’t you put a big spike on the end of the gangway? When we lower it, the weight will drive the spike right through their deck.”

Soon all the Roman ships were equipped with one of these gangplanks. They were stood up more or less vertically until they were needed. The enemy saw them and at first didn’t know what they were for. Nor did they care. They knew that the Romans were lousy sailors and all you had to do was ram their ships or drive them aground. Even to the Romans the gangways looked odd. They looked like a big bird—the spike was its beak. They started calling them “crows”. “Get the old crow [corvus in Latin] ready,” the captain would shout as they headed for an enemy quinquereme . 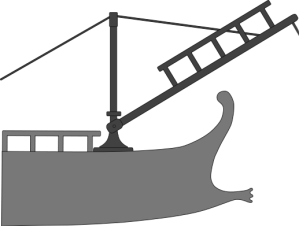 The crow was set up near the bow of the Roman ship and it could be swung around left, right, or forward, depending on the point of contact. It fell with a heavy slam and stapled the two ships together very firmly. As soon as it was down the Roman sailor-soldiers ran across: the first two holding up their shields to protect the men coming behind them. They took every ship they could board. The result was that soon the Carthaginians got very leery of Roman ships with crows and wouldn’t go near them. Their old ramming tactic was obsolete.

Return to The Crow:or the First Punic War (Part 1)

The Crow: or the First Punic War (Part 2)

14 Responses to The Crow: or the First Punic War (Part 3)